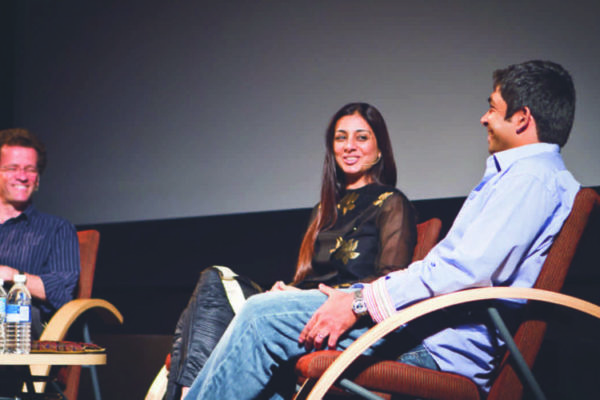 For 11 days the Goldcorp Centre for the Arts at SFU Woodward’s became a hub of intellectual and artistic activity, drawing arts lovers, foodies, literati, yoga enthusiasts, businesspeople, students, politicians, families, tourists and passers-by. Indian Summer was born at the confluence of two landmark events: the official Year of India in Canada and Vancouver 125th anniversary.

It all began with a rendezvous between East and West: Indian film star Tabu and Booker Prize-winning Canadian author Yann Martel conversing about the film adaptation of Life of Pi, and Vancouver’s own celebrity chef Vikram Vij tantalizing the taste buds of guests at the opening gala.

We were taken on several journeys of the mind and the senses, from violin maestro L. Subramaniam’s magical performances in the Fei & Milton Wong Theatre and free concert in Stanley Park to Tarun Tejpal’s illuminating and impassioned talk about contemporary India. Shiamak Davar’s free Bollywood dance classes in the atrium attracted 4-year-olds and 80-year-olds, and got everyone’s heart pumping.

This was our year zero – an exploration, an adventure, to see if Vancouver would receive a new international festival that reflected the baffling diversity that India and Vancouver share. The answer was a resounding YES.

We couldn’t have hoped or planned for better. We had incredible support from the Consulate General of India in Vancouver, ICCR and the Province of BC. Our vision was further propelled by our sponsors and patrons, media partners, partner organisations, and local artists. And of course, most importantly, Vancouverites came out in large numbers to join us. Members of the audience included former Attorney General Wally Opal, MLA Adrian Dix, Senator Yonah Martin, Ministers Ed Fast and Bal Gosal, renowned choreographer Shiamak Davar and celebrated architect Bing Thom, among others.

We also played host to students of SFU, UBC, VFS, Kwantlen and Langara College. Members of the Downtown Eastside community joined us for several film screenings and outdoor bollywood dance classes. The venue was always buzzing, and we had several full houses. What was most heartening was that the festival hub quickly became a place where old friends meet and new ones are made, as we celebrated Vancouver’s birthday with Indian flair.